Last week the girls had two half-days and one holiday for their end of term “break” and so we took off for the mountains as fast as we could go.  We headed to our favorite spot – in North Carolina near the Cherohala Skyway. We stayed at a cabin that we’ve stayed in before and met Mom and my stepdad for the long weekend.

On Thursday, it was rainy and cool so we spent most of the day at the cabin listening to the rain and relaxing. It was a lazy day and one we very much needed.  We spent a lot of time right out here on the porch enjoying the rain and yet staying dry.

On Friday, the day dawned cool and crisp and so SuperMan and I decided to take the girls to the Joyce Kilmer Memorial Forest for a hike. It is a wilderness area so the trails are rustic and rough, but it was a beautiful walk through the woods.

SuperMan and Big Girl led the way as they’ve been there a few times on previous trips.

The streams rushing along the paths were so beautiful and soothing.

SuperMan was never one to stay on the beaten path – and he wasn’t going to here, either…

Big Girl shot a “selfie” and got both of us as I walked up into the picture by accident. I like it, though. Not sure why she likes the lopsided angle, but a lot of her selfie shots are that way. Must be a teenager thing.

Along with the very big trees there were very big leaves which doubled nicely for bunny ears.

Little Bit and I got tired on the hike and headed back to the base camp early while SuperMan and Big Girl finished up the route. We propped our (tired) feet up and relaxed in the sunshine by the stream while we waited on the others.

Oooh, my achin’ feet. Cowboy boots were not meant for hiking in the mountains… (lesson learned) 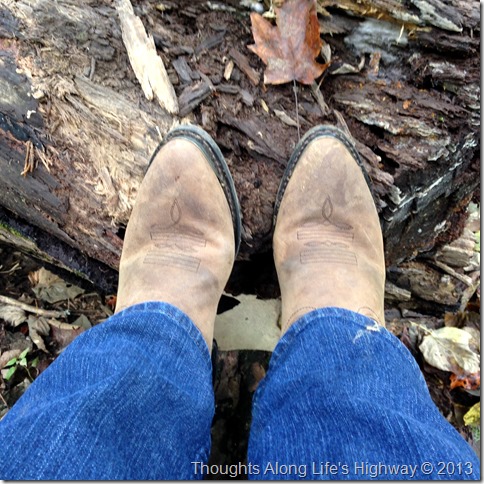 After we left the Joyce Kilmer Forest, we headed up to the overlook above the trails.

SuperMan was keeping me warm. It was breezy (and cold!) up there.

Then we headed over the pass for a ride along the Cherohala Skyway.  As always, it was beautiful.

On the other side of the Skyway is Tellico Plains, TN.  As we drove along towards Tellico Plains, we passed the Tellico river. It was absolutely beautiful and so after we ate some barbeque and headed back over the Skyway to the cabin SuperMan stopped so that I could take some pictures of the river.  My scenic photography was interrupted by two goofballs who decided to be in the photos … 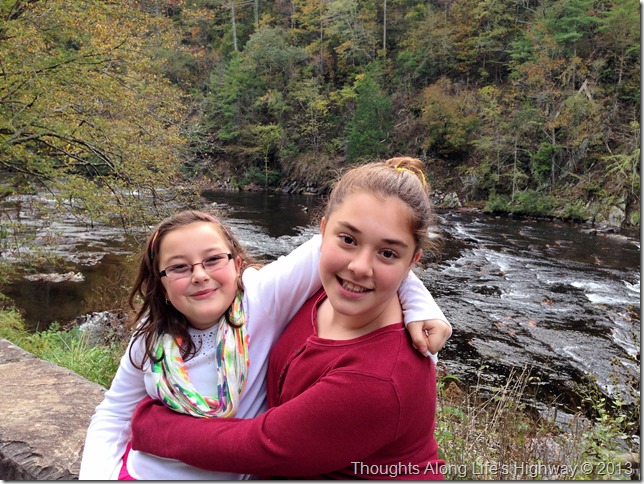 They’re cute, though, aren’t they?