Well, we took the day off yesterday.

Or, rather, the girls and I took the day off.

They had a school holiday – the last “inclement weather” day of the school year.  So, I took the day off of work to spend with them.  But it wasn’t really a day “off” for us – we were busy bees.

It’s not grand, but we’re pretty proud of it.  I’m hoping we get some yummy veggies out of it this summer.

While the girls were playing (school, no less!) I rigged up what I’m affectionately calling my “redneck irrigation system.”  I used a soaker hose and some random bits of flotsam to create a little irrigation track for the garden. I’m hoping we’ll actually remember to turn it on every day for a little while to keep things watered and growing. 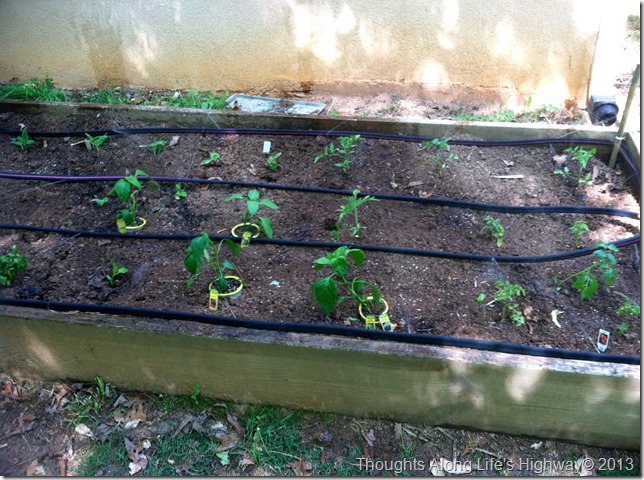 And then we spent a while spreading pine straw – 15 bales of it to be exact. And if that wasn’t enough, we went out to dinner and to a play that two of Big Girl’s friends were acting in.

And then we came home and collapsed. Literally.

Today is a little less ambitious although I have plans to catch up on the laundry and clean my floors… and maybe bake a cake… but that’s about it.

We got a new birdfeeder, too, today.  And we’ve been invaded by these cute birdies – a whole family of red breasted grosbeaks.

Have you ever heard of them before? I’d never seen them until now but they apparently love this feed I’ve bought and they’re hanging around all the time nowadays.  They are a lively bunch ~ the only negative thing is that the smaller birds seem to be a bit intimidated by them and don’t come around as much. But I’ve got two feeders so hopefully they’ll all have a shot.

Oh, and we’ve been battling the squirrels lately. I went to the feed & seed this morning and got some more of that habanero-coated birdseed. They don’t seem to like that too much.

Note to self: Don’t stir the habanero birdseed with your bare hands. Even if you wash them (twice) you’ll still end up sorry. Just sayin’

I told them I guess there’s always something to put our troubles in perspective, isn’t there?

And so now I’m off to do my baking and cleaning – and then tomorrow will be a day of rest for us.

What’s up in your world?