You hear people say that all the time –

“You’re growing up so fast!”

“Look at how you’ve grown!”

Who knew there really was such a thing as growing up too fast? (besides mommies who always think their kids grow up too fast (and too slowly, at the same time))

But there really is a condition …

…and apparently, Big Girl has it.

She has been complaining of a sore ankle and we thought she’d just sprained it.  So, we’ve been icing it, wrapping it with an Ace bandage and keeping her (relatively) inactive.  But it’s been two weeks and it is getting worse, not better.

So, today we went to the podiatrist to make sure she wasn’t dealing with some hairline fractures or something worse.

Turns out she has what is called Sever’s Syndrome. Basically, it’s where your foot grows faster than the tendons and they are stretched too far.  The heel has a growth plate that is attached to the Achilles tendon and this is where the pain occurs.

It is apparently very common among active 10-15 year olds and is intermittent. So, we will probably be dealing with it for some time to come. 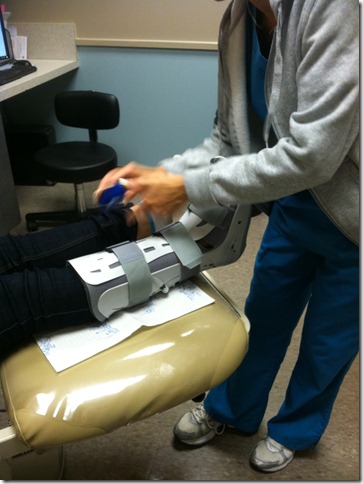 She is in a boot for the next three weeks and then we go back to the doctor for a re-check and possibly orthotics to help alleviate future flare-ups.

She is bummed about not being able to dance and participate in activities at school but I am relieved that she is not dealing with broken bones or a severe strain/sprain.

(on a side note, she couldn’t believe I was taking pictures in the doctor’s office! hee hee)

4 thoughts on “Growing up too fast”