Since I had quite a few pictures to share, I decided to split into two posts. Here are some more from our trip to the Circus last weekend.

They opened with an “All aboard” type of number – reminiscent of the circus trains of yesteryear.  The theme was celebrating the 200th anniversary of PT Barnum’s circus, so it was a retro/modern-themed affair. They did a really good job of paying homage to circuses of the past while incorporating technology and new things into the show.

See the little guy with the yellow vest? He was riding a Segueway without the handles. It was really cool. They had about 30 of them and they rode them all over the place steering with their legs. 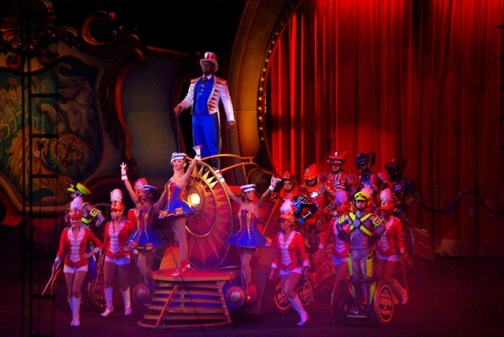 Some of our favorite acts:

Of course the elephants. Love them. Didn’t quite get the whole laying down part of the act, and I certainly wouldn’t have wanted to be the poor guy on the bottom here. 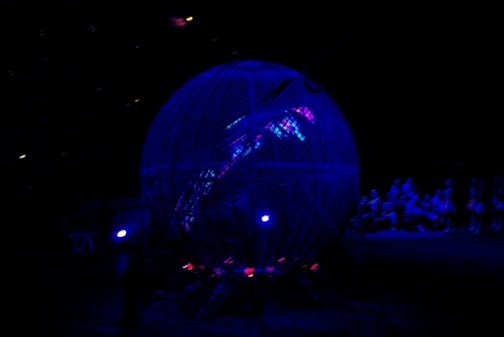 These guys, in their motorcycle-sphere-of-death act scared the snot out of me (literally)  I kept holding my breath the entire act waiting for someone to fall and the whole thing come crashing down. Leave it to the mom in me to be worrying about how they would get them all out and how the EMTs would take care of them if they crashed rather than enjoy the act. I was scared to death.

There were SEVEN motorbikes in there at one time! SEVEN!

And one was a woman! You would think SHE would have had better sense than that.

The high wire guys.  The act was actually a little boring.  But I liked their costumes.

But the acrobats, now they were phenomenal.  These two brothers were just incredible. Not an ounce of fat on their bodies – they were ALL MUSCLE and they had the most amazing control I have ever seen. I was in awe watching them.

SuperMan and Big Girl were in awe of these gals. They decided they have probably been practicing since they were little bitty girls, too.

At one point they were all three crammed into a box that was about 3’ x 4’ x 3’.  THAT was amazing. To watch them unwind and come out of there. Made my back hurt just to watch! 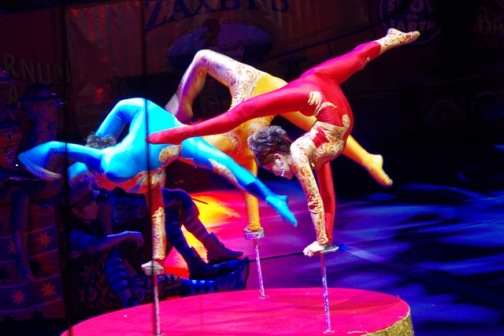 And my favorites, the tigers. Although they seemed a little cranky to me. Not really interested in participating in the show. 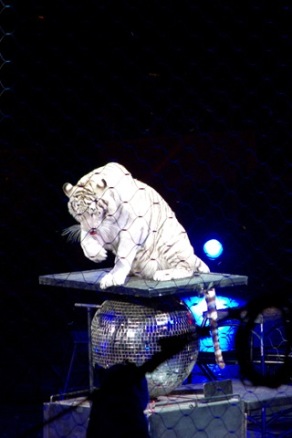 There was what I think was a mommy/baby pair, too. When the younger one came down, she gave him/her a little lick to reassure him/her that all was OK. Once they finished their part of the act they left and the little guy seemed quite happy to be out of the spotlight. I’m sure it was overwhelming to be out there

And these guys were awesome. See those little sticks they were jumping on? Wow. Just wow.